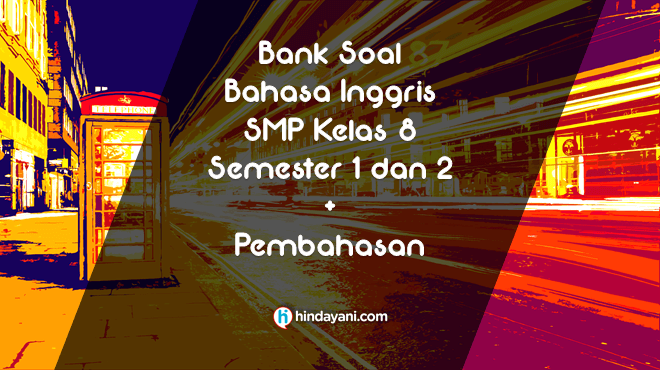 1. Your friend invites you to come to his/her house to do homework together.

Nia : Do you want to come to my house? We can do our homework together.

2. It is late in the evening, your friend asks you to come to his/her house for a drink.

Ajeng : Come and have a drink at my house.

3. You are invited by your new friend to watch a football match at the football stadium. Your favourite team is going to play.

Upin : Would you like to come and watch the football game with me? The Indonesian team is going to play against the All-Star team.

Study to the following sentences and Fill in the blanks.

2. Who saw an accident yesterday?

4. Whom did Mayang see in the accident?

5. Where did Mayang see Omy yesterday?

Arrange the following paragraph into a correct order

a. My uncle and my aunt were very nice. We visited Batam Centre, Waterfront City and Nongsa Beach. The weather was hot all day long.

c. Unfortunately, Seno and I disagreed on most things. He played loud music when I wanted to sleep. When his bestfriend came to stay, I had to sleep on the floor.

d. I went to my uncle’s house in Batam last month on the long holiday. I stayed with Uncle Antasena and Aunt Firda and their son which is my cousin Seno. They live in a small house in the centre of the city called Nagoya. I liked the house but I didn’t like the area much because it was very noisy.

e. I can’t say I would like to go back to my uncle house. It wasn’t a very good holiday.

It is in the middle of summer, the air is very hot and dry. The temperature is about 34 degrees Celsius. I am sitting by the window of my living room, looking at the streets and drinking some iced lemon tea. Sometimes I wonder why the weather in my hometown is always bad in each season. Last winter, a big snow storm paralysed this city and lasted almost a month. But things are not easy in the spring. The snow melted into mud and it covered the city. The previous summer was worse, lots of people dehydrated because of the heat. Hopefully, next fall will not be as bad as the last one. Last fall the wind and the rain were pretty bad.

3. The weather is in every season.

4. Last winter, the city was paralyzed. What is the meaning of paralyzed?

5. What struck the city last winter was?

6. It covered the city with mud. It refers to?

7. What is the effect of the terrible heat wave?

8. This summer is the previous one.

Read the dialogue and choose the right answers for the 9-14 questions.

Tomi : Where are you going to spend your holiday?

Tomi : Why are you going to spend the

Tuti : It is not as crowded as Jakarta and

Surabaya. The weather is rather cold at night.

9. Where is Tuti going to spend the holiday?

10. Tuti is going to spend the holiday there because she likes .

What Tomi says is a statement which shows a/an to the affirmative statement before.

Amir and Bima are SMP students. They live in Bandung. Bandung and its surroun dings are mountainous and hilly areas. They usually go to the beach during the holidays, they can choose one from many beautiful beaches in Indonesia. Some of the beaches on Java Island are Pantai Carita, the beaches in Pelabuhan Ratu, Pangandaran, Ancol, Parangtritis, while Sanur, and Kuta are in Bali.

17. Where do they usually go during the holidays?

18. These are beaches on Java island, except

My name is Ary. Three years ago when I was in junior high school, I met two people that later became my best friends. The first one was Eric. He was an athlete for our school. He was tall and muscular. The other one was Ricky. He was a very diligent student. He liked to read the encyclopedia and he the ranked first in my class. I liked them both because they were very friendly to other people. Even though Eric and Ricky were very famous in our school, they were not arrogant. They made friends with anybody including me.

20. When did Ary meet his best friend?

23. What kind of person was Ricky?

Redfeathers, the hen, was so-called because all her feathers were red. One day, the fox caught sight of her in the farmyard and his mouth began to water. He ran home and told his wife to put on water for boiling a chicken, and then he rushed back, and before Redfeathers knew what was happening, she found herself snapped up and inside a sack, not even able to call for help.

Luckily for her, her friend the dove saw what had happened. She fluttered on the path in the woods, and lay there, pretending to have a broken wing. The fox was delighted to find that he now had a first course as well as a main dish. He put down the sack with the hen in it, and chased off after the dove, who began cleverly to hop further and further away.

Redfeathers slipped out of the sack and put a stone in her place, then she too ran off. When the dove saw that her friend was safe, she flew up into a tree. The fox then went back and picked up the sack, thinking that the hen was still in it. When he got home, the fox tipped the sack into the pot of boiling water, but the stone splashed it all over him, and he burned his greedy paws.

26. What did the fox do, after he caught sight of Redfeathers?

28. What did the fox think when he found the dove?

29. What happened to the dove?

30. What did Redfeathers do to trick the fox?

Choose either a, b, c or d for the right answer. Decide the right tense whether it is past tense or past continuous.

32. I didn’t want to go to the zoo yesterday because it …

34. I didn’t hear the thunder during the storm last night because I …

35. It was a beautiful day when we…. for a walk in the park yesterday.

36. I really enjoyed my vacation last January. While it ……in Iowa, the Sun was shining in Florida.

37. My brother and sister were arguing about something when I….. into the room.

40. My stomach does not feel good. I….. spicy food this morning.